Here’s what’s happening around the world this week:

But here’s what the family are up to in Oxshott:

Monday 27th November 1967
Very busy at the office – Cyril picked me up at 12:30 – saving petrol, I went up with him and home at lunch time!! Cooked this evening. Joan rang.

Tuesday 28th November 1967
Doris had her operation today. KWM (Mr Murray) is quite pleased with me today for stopping a cheque in time – to a wine company that looks a bit shady. Quite busy at the office in spite of devaluation etc. etc. or perhaps because of it!

Wednesday 29th November 1967
Have worked all day, thus increasing my hours of work a little!! Plenty to do there. Busy on my own accounts this evening.

Thursday 30th November 1967
Have had a rushed day – to Esher to the bank at lunch time and rushed home to prepare the lunch, then back to the office – didn’t have my pay cheque though.

Friday 1st December 1967
Only worked until quarter to eleven then went to the Village Centre – bought a few items at the sale. Damp and foggy. Have done the washing and spent my £10 at Cullens!! We were to go to Brownies AGM but Gillian came home from school with a cough and headache. I’ve made some mincepies and cakes this evening.

Saturday 2nd December 1967
Gill and I went for a hair do this afternoon – she did look grown up!! Molly and Ted arrived about five and left at quarter to nine. We played Canasta.

And here’s what our family are up to back in Oxshott;-

Sunday 19th November 1967
Cyril has done what he set out to do – put all the bulbs in – children helped when they came home from Sunday School. I made the Christmas puds this afternoon.

Monday 20th November 1967
Busy day at the office. Mr. Murray doesn’t seem unduly worried about devaluation and the rise in the bank rate. The daily papers are certainly having a ball – what with the politics and the dreadful foot and mouth disease – the papers and the newsreels are most depressing.

Tuesday 21st November 1967
Feeling down in the dumps today – probably doing too much going to work mornings and afternoons and trying to keep things up to date at home.

Wednesday 22nd November 1967
Cyril didn’t come home to lunch, so I came down for an hour and did some washing and cleaning up. Quite a nice afternoon. Cyril picked the Brownies up at 5:30pm.

Thursday 23rd November 1967
Feeling miserable today – Cyril and I are not the best of friends. Quite a nice, fine day. Letter from our Mur – to my surprise she didn’t tear me off a strip because of my last letter to her.

Friday 24th November 1967
Only intended working this morning. Went to work early and left early. Came home and cooked the lunch, did some washing and finished preparing fruit and tin for Christmas cake. Then I went to the Christmas Fair and baked the Christmas cake this evening.

Saturday 25th November 1967
Philip coughing slightly so he stayed in bed all morning. Gill and I went to Esher Library and did some (only a little owing to funds – lack of!) Christmas shopping! Gill and I went again to the Christmas Fair. I won a bottle of sherry on the bottle stall. Had a chicken dinner this evening. 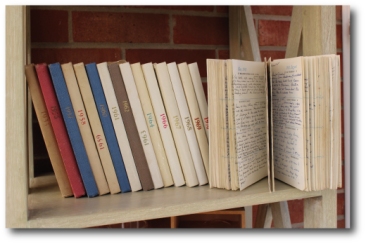 Here’s what’s going on around the world this week:

Sunday 12th November 1967
Took the children on the heath to see the poppy wreaths. Doris rang to say Eileen is very poorly, so Cyril went over this afternoon. Don’t know quite what is wrong with Eileen but Cyril says she looks very ill.

Monday 13th November 1967
Eileen was taken to hospital today, but Doris doesn’t think she will be kept in very long. Not a very nice day, raw and cold. Have coloured and shampooed my hair this afternoon.

Tuesday 14th November 1967
Eileen seems a little better today according to Doris. She may be allowed home on Friday. Cyril in town today so he wasn’t home for lunch. Wives tonight – I don’t really feel like going out. Have fibrositis or something in my arm.

Wednesday 15th November 1967
It’s Friday now so I must hark back!! Think I worked all day – I’m sure I did. Cyril picked Gill up from Brownies. I made fudge for Mary’s Christmas stall on Saturday.

Thursday 16th November 1967
Only worked this morning and played badminton this afternoon, I think for the last time this season. Made more fudge for Mary. Gill packed it all up.

Friday 17th November 1967
Very frosty morning. My car was all iced up and I had a shocking journey to the office. Eileen isn’t any better, I think we shall go and see her on Sunday.

Saturday 18th November 1967
Black day for the country – the pound has been devalued and the bank rate is up to 8%. Cyril and Leonard quite put off their canasta when this news came through. I took Gill to Molesey on Saturday to Mary’s “Gypsy Fayre” – not very thrilling.

Here’s what’s happening around the world this week in 1967:-

Here’s what’s happening back in Oxshott:-

Sunday 5th November 1967
Forgot it was church parade this morning so we didn’t go to church. Cyril and I played Monopoly all afternoon with the children. I’ve been to Pyrford with Mary to see David.

Monday 6th November 1967
Gill woke up in tears this morning and said she had been awake all night with a headache so I left her in bed – she is running a slight temperature too.

Tuesday 7th November 1967
Gillian stayed in bed again today. I went off to Esher at 8:30am – nearly broke my arms doing a month’s shopping at Pricerite for double stamps. Have the auditors in at the office.

Wednesday 8th November 1967
Foggy morning, but turned out to be a lovely afternoon. Gill has spent the whole day in bed. I brought some work home this afternoon. Philip bright and cheerful even though he had a wakeful night.

Thursday 9th November 1967
Cyril didn’t come home to lunch today so Gill and I had omelette. I had to go back to work for a short while – 1¾hrs – picked Phil up and we played Monopoly when we got home. Kind Cyril, he went out and bought me 4 galls petrol!!

Friday 10th November 1967
Didn’t work this afternoon – did my washing instead and about 2 hours gardening. Gill up and dressed this afternoon.

Saturday 11th November 1967
A mixed-up Saturday! Eileen Buchan took Phil to the Lord Mayor’s show with Andrew. They had a lovely day – Gillian went to London Airport with Cyril to meet Ron F – back from USA – I had a busy time in Esher. Very busy. Ordered Phil’s Christmas present. Drove to Stockwell – other side of Clapham Common this afternoon to help at Ruth’s (Mary’s sister) Annual event. Home at 6:30pm.